A notable feature of Apache Airflow is the user interface (UI), which provides insights into your DAGs and DAG runs. The UI is a useful tool for understanding, monitoring, and troubleshooting your pipelines.

This guide is an overview of some of the most useful features and visualizations in the Airflow UI. Each section of this guide corresponds to one of the tabs at the top of the Airflow UI. If you're not already using Airflow and want to get it up and running to follow along, see Install the Astro CLI to quickly run Airflow locally.

This guide focuses on the Airflow 2 UI. If you're using an older version of the UI, see Upgrading from 1.10 to 2.

All images in this guide were taken from an Astronomer Runtime Airflow image. Other than some modified colors and an additional Astronomer tab, the UI is the same as that of OSS Airflow.

The DAGs view is the landing page when you sign in to Airflow. It shows a list of all your DAGs, the status of recent DAG runs and tasks, the time of the last DAG run, and basic metadata about the DAG like the owner and the schedule. To see the status of the DAGs update in real time, toggle Auto-refresh (added in Airflow 2.4).

In the DAGs view you can:

To see more information about a specific DAG, click its name or use one of the links.

The Graph view shows a visualization of the tasks and dependencies in your DAG and their current status for a specific DAG run. This view is particularly useful when reviewing and developing a DAG. When running the DAG, toggle Auto-refresh to see the status of the tasks update in real time.

Click a specific task in the graph to access additional views and actions for the task instance.

Specifically, the additional views available are:

The actions available for the task instance are:

The Grid view was introduced in Airflow 2.3 and shows a grid representation of the DAG's previous runs, including their duration and the outcome of all individual task instances. Each column represents a DAG run and each square represents a task instance in that DAG run. Task instances are color-coded according to their status. A small play icon on a DAG run indicates that a run was triggered manually, and a small dataset icon shows that a run was triggered via a dataset update.

Click a square in the grid to view more details about the task instance and access links to additional views and actions.

The Grid view replaced the Tree View in Airflow version 2.3 and later.

The Calendar view is available in Airflow 2.1 and later. It shows the state of DAG runs overlaid on a calendar. States are represented by color. If there were multiple DAG runs on the same day with different states, the color is a gradient between green (success) and red (failure).

The Code view shows the code that is used to generate the DAG. While your code should live in source control, the Code view provides a quick insight into what is going on in the DAG. DAG code can't be edited in the UI.

This view shows code only from the file that generated the DAG. It does not show any code that may be imported in the DAG, such as custom hooks or operators or code in your /include directory.

The following are the additional DAG views that are available, but not discussed in this guide:

The Dataset tab was introduced in Airflow 2.4 in support of the new dataset driven scheduling feature. The Dataset tab links to a page showing all datasets that have been produced in the Airflow environment, as well as all dependencies between datasets and DAGs in a graph.

Click a dataset to open the history of all updates to the dataset that were recorded in the Airflow environment. 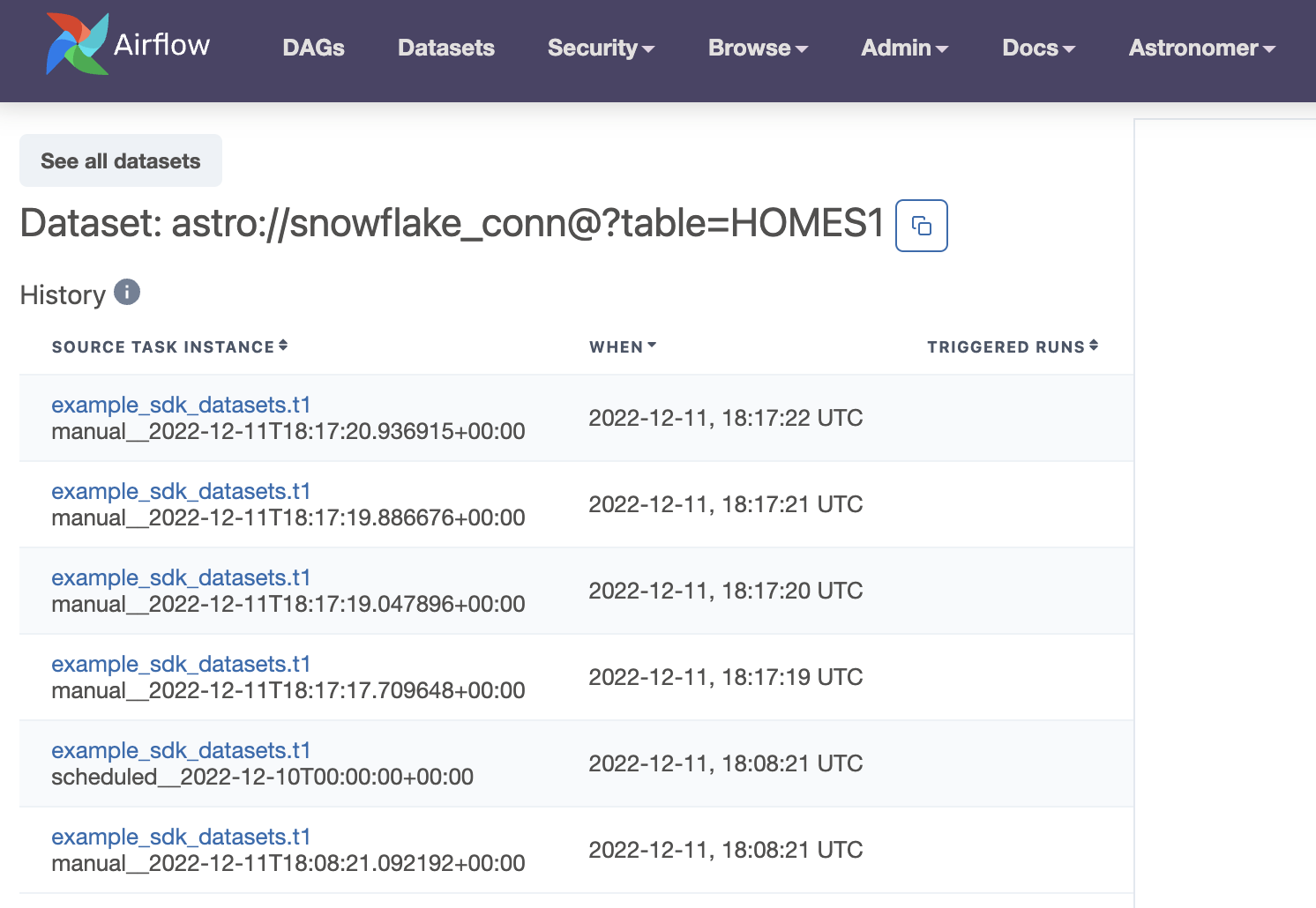 The Security tab links to multiple pages, including List Users and List Roles, that you can use to review and manage Airflow role-based access control (RBAC). For more information on working with RBAC, see Security.

The Browse tab links to multiple pages that provide additional insight into and control over your DAG runs and task instances for all DAGs in one place.

The DAG runs and task instances pages are the easiest way to view and manipulate these objects in aggregate. If you need to re-run tasks in multiple DAG runs, you can do so from this page by selecting all relevant tasks and clearing their status.

The DAG Dependencies view shows a graphical representation of any cross-DAG and dataset dependencies in your Airflow environment.

Other views on the Browse tab include:

The Admin tab links to pages for content related to Airflow administration that are not specific to any particular DAG. Many of these pages can be used to both view and modify your Airflow environment.

For example, the Connections page shows all Airflow connections stored in your environment. Click + to add a new connection. For more information, see Managing your Connections in Apache Airflow.

Similarly, the XComs page shows a list of all XComs stored in the metadata database and allows you to easily delete them.

Other pages on the Admin tab include:

The Docs tab provides links to external Airflow resources including:

This guide provided a basic overview of some of the most commonly used features of the Airflow UI.

The Airflow community is consistently working on improvements to the UI to provide a better user experience and additional functionality. Make sure you upgrade your Airflow environment frequently to ensure you are taking advantage of Airflow UI updates as they are released.