Skip to main content
The documentation for Astronomer Software 0.25 is no longer actively maintained.
For up-to-date documentation, see the latest version (0.28).
Version: 0.25

This guide will help you get started on Astronomer by walking through a sample DAG deployment from start to finish.

Whether you're exploring our Software or Cloud offering, we've designed this to be a great way to become familiar with our platform.

The Astronomer CLI is the easiest way to run Apache Airflow on your machine. From the CLI, you can establish a local testing environment and deploy to Astro whenever you're ready.

There are two ways to install any version of the Astronomer CLI:

Note: If you're running on Windows, check out our Windows Install Guide.

Install the CLI via cURL​

To install the latest version of the Astronomer CLI via cURL, run:

Install the CLI via Homebrew​

To install the latest version of the Astronomer CLI via Homebrew, run:

For more information on the Astronomer CLI, read CLI Quickstart.

If you are in charge of setting up Astronomer for your team, follow one of our Software installation guides to get Astronomer running on your Kubernetes Cluster.

We have documentation for deploying Astronomer on:

Using the Astronomer CLI, create an Airflow project to work from that lives on your local machine:

This will generate the following files:

A few of these files are essential for deploying your Airflow image for the first time:

Your Dockerfile will include reference to an Astronomer Certified Docker Image. Astronomer Certified (AC) is a Debian-based, production-ready distribution of Apache Airflow that mirrors the open source project and undergoes additional levels of rigorous testing conducted by our team.

This Docker image is hosted on Astronomer's Docker Registry and allows you to run Airflow on Astronomer. Additionally, the image you include in your Dockerfile dictates the version of Airflow you'd like to run both when you're developing locally and pushing up to Astro.

The Docker image you'll find in your Dockerfile by default is:

This will install a Debian-based AC image for the latest version of Airflow we support. To specify a particular Airflow version, read Upgrade Airflow and the Customize your Image topic below.

To help you get started, your initialized project includes an example-dag in /dags. This DAG simply prints today's date, but it'll give you a chance to become familiar with how to deploy on Astronomer.

If you'd like to deploy some more functional DAGs, upload your own or check out example DAGs we've open sourced.

Since Astronomer is running entirely on your infrastructure, the Software UI will be located at a base domain specific to your organization. Head to app.BASEDOMAIN in your web browser and log in. You're in the right place if you see the following login screen:

Note: If you are not the first person to log in, you will need an email invite to the platform.

If you're the first person to log in to the Software UI, click New Workspace to create a Workspace.

You can think of Workspaces the same way you'd think of teams - a space that specific user groups have access to with varying levels of permissions. From within a Workspace you can create one or more Airflow Deployments, each of which hosts a collection of DAGs.

Step 6: Authenticate to Astronomer from the CLI​

You can authenticate to Astronomer using the following command:

You'll be prompted to authenticate and select the Workspace that you want to operate in.

The first user to log in to the Astronomer platform will become a System Admin by default. Additional users can be added via the Software UI or CLI. For more information on user permissions at the platform level, read Manage Users on Astronomer Software.

In the Software UI, use the New Deployment menu to configure the following:

Once you've finished, click Create Deployment. After it spins up, your new Deployment should look something like this: 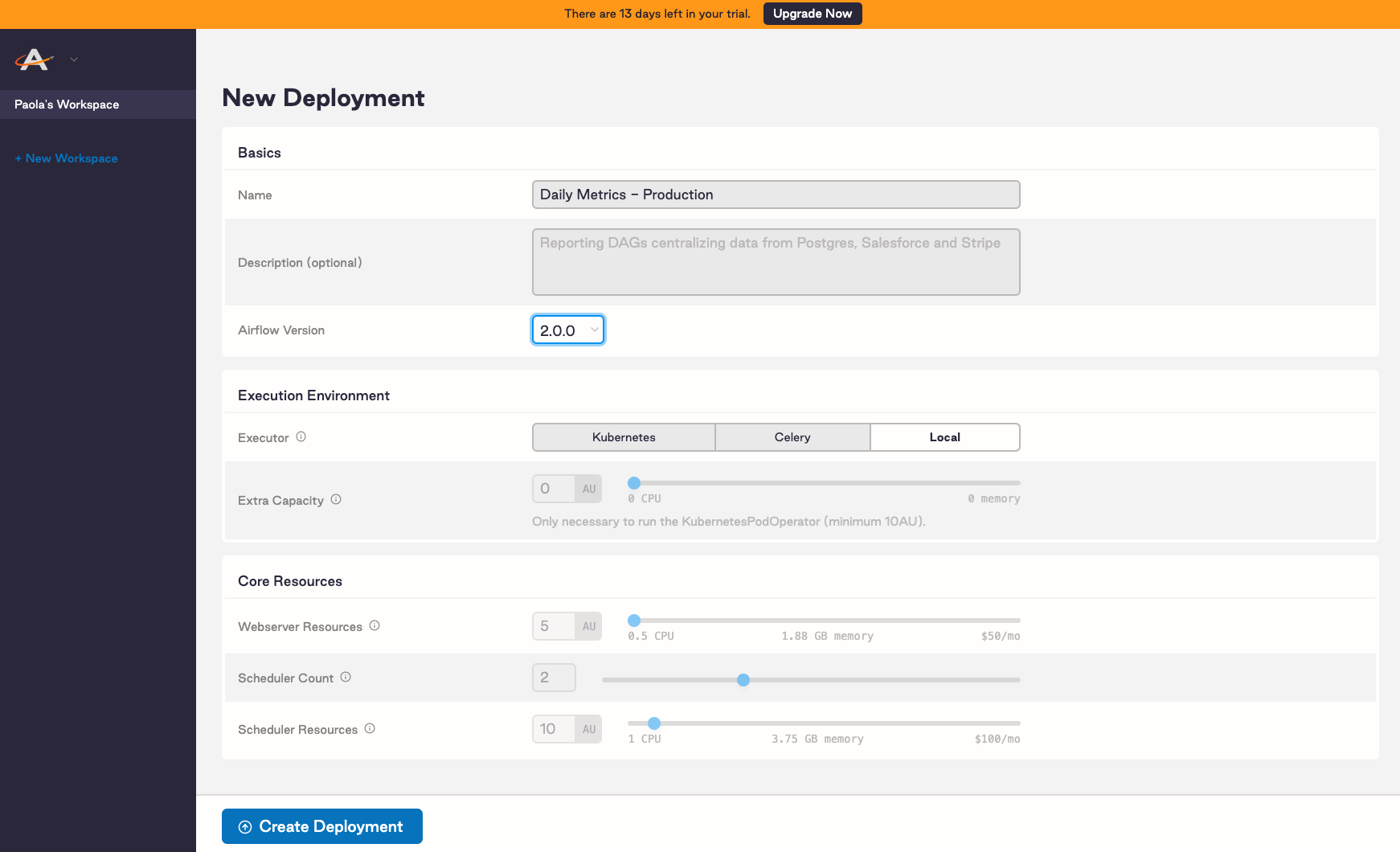 You can now use Astronomer to start Airflow locally and deploy code. To do so:

Once you've turned on the example-dag in the Airflow UI, go to the Metrics tab in the Software UI to see metrics for your Deployment in real time.

The Metrics tab only shows metrics for a given Deployment. If you are the first user to authenticate to Astronomer, you'll additionally have access to administrative views of Grafana and Kibana via the dropdown menu in the Software UI: 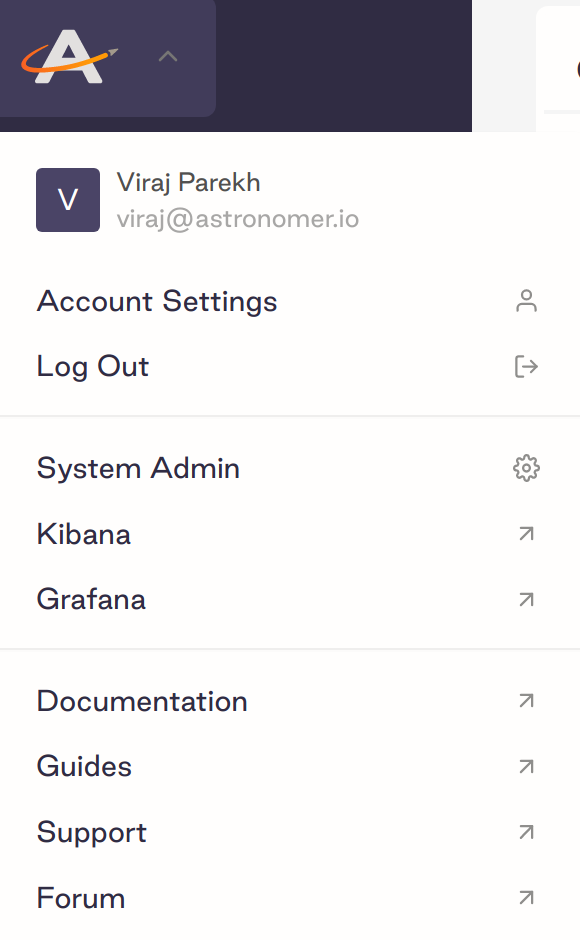 Once you've successfully installed your Astronomer platform, we recommend doing the following: