With the release of Airflow 2.3, you can write DAGs that dynamically generate parallel tasks at runtime. This feature, known as dynamic task mapping, is a paradigm shift for DAG design in Airflow.

Prior to Airflow 2.3, tasks could only be generated dynamically at the time that the DAG was parsed, meaning you had to change your DAG code if you needed to adjust tasks based on some external factor. With dynamic task mapping, you can easily write DAGs that create tasks based on your current runtime environment.

In this guide, you'll learn about dynamic task mapping and complete an example implementation for a common use case.

The Airflow dynamic task mapping feature is based on the MapReduce programming model. Dynamic task mapping creates a single task for each input. The reduce procedure, which is optional, allows a task to operate on the collected output of a mapped task. In practice, this means that your DAG can create an arbitrary number of parallel tasks at runtime based on some input parameter (the map), and then if needed, have a single task downstream of your parallel mapped tasks that depends on their output (the reduce).

Airflow tasks have two new functions available to implement the map portion of dynamic task mapping. For the task you want to map, all operator parameters must be passed through one of the following functions.

Airflow 2.4 allowed the mapping of multiple keyword argument sets. This type of mapping uses the function expand_kwargs() instead of expand().

In the following example, the task uses both of these functions to dynamically generate three task runs:

This expand function creates three mapped add tasks, one for each entry in the x input list. The partial function specifies a value for y that remains constant in each task.

When you work with mapped tasks, keep the following in mind:

The Airflow UI provides observability for mapped tasks in the Graph View and the Grid View.

In the Graph View, mapped tasks are identified with a set of brackets [ ] followed by the task ID. The number in the brackets is updated for each DAG run to reflect how many mapped instances were created.

Click the mapped task to display the Mapped Instances list and select a specific mapped task run to perform actions on. 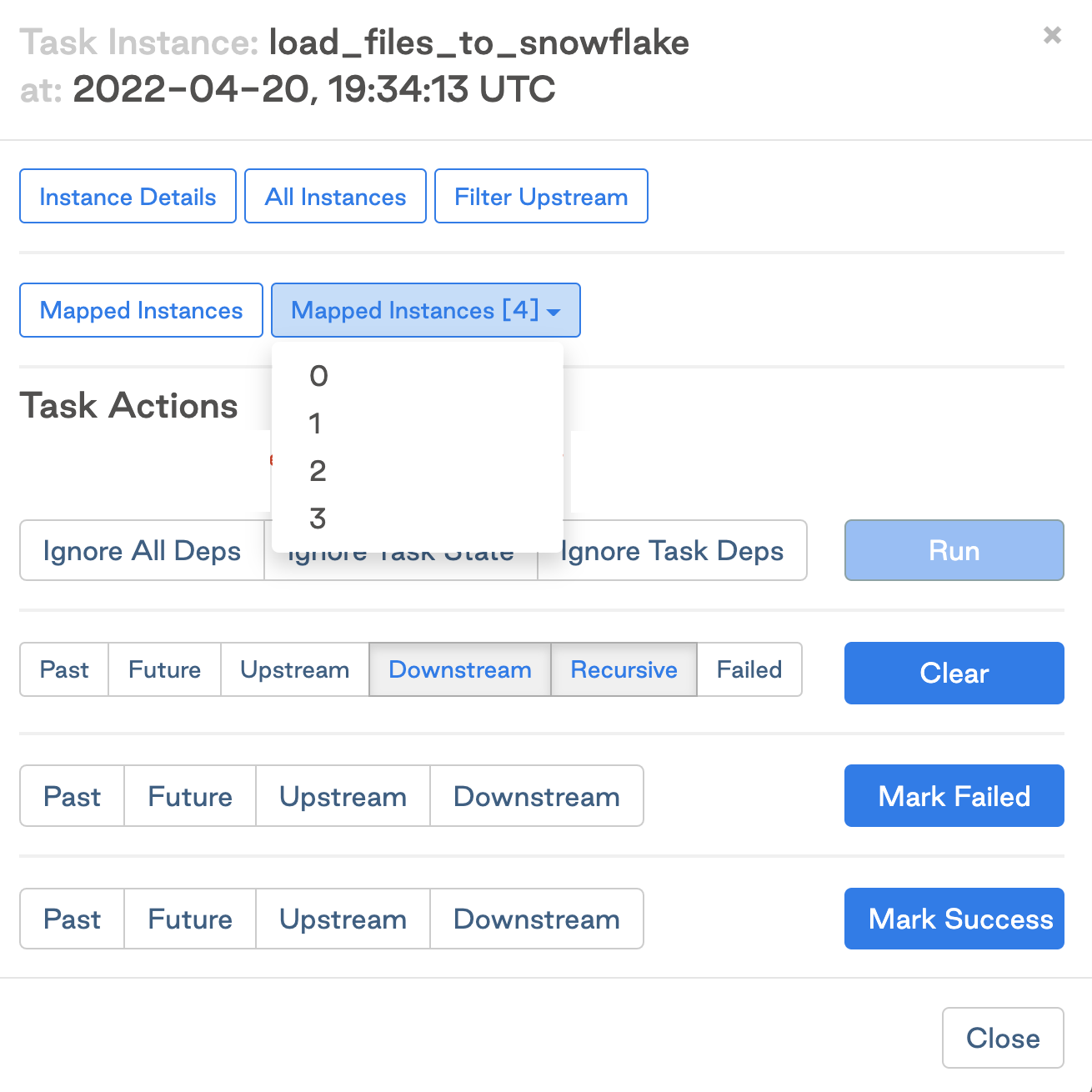 Select one of the mapped instances to access links to other views such as Instance Details, Rendered, Log, XCom, and so on.

The Grid View shows task details and history for each mapped task. All mapped tasks are combined into one row on the grid. In the following image, this is shown as mix_cross_and_zip [ ]. Click the task to view details for each individual mapped instance below the Mapped Tasks tab.

Mapping over the result of another operator​

You can use the output of an upstream operator as the input data for a dynamically mapped downstream task.

In this section you'll learn how to pass mapping information to a downstream task for each of the following scenarios:

Map inputs when both tasks are defined with the TaskFlow API​

If both tasks are defined using the TaskFlow API, you can provide a function call to the upstream task as the argument for the expand() function.

The format of the mapping information returned by the upstream TaskFlow API task might need to be modified to be accepted by the op_args argument of the traditional PythonOperator.

If you are mapping over the results of a traditional operator, you need to format the argument for expand() using the XComArg object.

Map inputs when both tasks are defined with traditional operators​

You can use one of the following methods to map over multiple parameters:

The nine mapped task instances of the task cross_product_example run all possible combinations of the bash command with the env variable:

To map over sets of inputs to two or more keyword arguments (kwargs), you can use the expand_kwargs() function in Airflow 2.4 and later. You can provide sets of parameters as a list containing a dictionary or as an XComArg. The operator gets 3 sets of commands, resulting in 3 mapped task instances.

The task t1 will have three mapped task instances printing their results into the logs:

In Airflow 2.4 and later you can provide sets of positional arguments to the same keyword argument. For example, the op_args argument of the PythonOperator. You can use the built-in zip() Python function if your inputs are in the form of iterables such as tuples, dictionaries, or lists. If your inputs come from XCom objects, you can use the .zip() method of the XComArg object.

The zip() function takes in an arbitrary number of iterables and uses their elements to create a zip-object containing tuples. There will be as many tuples as there are elements in the shortest iterable. Each tuple contains one element from every iterable provided. For example:

The task add_numbers will have three mapped task instances one for each tuple of positional arguments:

It is also possible to zip XComArg objects. If the upstream task has been defined using the TaskFlow API, provide the function call. If the upstream task uses a traditional operator, provide the XComArg(task_object). In the following example, you can see the results of two TaskFlow API tasks and one traditional operator being zipped together to form the zipped_arguments ([(1,10,100), (2,1000,200), (1000,1000,300)]).

To mimic the behavior of the zip_longest() function, you can add the optional fillvalue keyword argument to the .zip() method. If you specify a default value with fillvalue, the method produces as many tuples as the longest input has elements and fills in missing elements with the default value. If fillvalue was not specified in the example below, zipped_arguments would only contain one tuple [(1,10,100)] since the shortest list provided to the .zip() method is only one element long.

The add_nums task will have three mapped instances with the following results:

There are use cases where you want to transform the output of an upstream task before another task dynamically maps over it. For example, if the upstream traditional operator returns its output in a fixed format or if you want to skip certain mapped task instances based on a logical condition.

The .map() method was added in Airflow 2.4. It accepts a Python function and uses it to transform an iterable input before a task dynamically maps over it.

The downstream task is dynamically mapped over the object created by the .map() method using either .expand() for a single keyword argument or .expand_kwargs() for list of dictionaries containing sets of keyword arguments.

The code snippet below shows how to use .map() to skip specific mapped tasks based on a logical condition.

In the grid view you can see how the mapped task instances 0 and 2 have been skipped.

For this example, you'll implement one of the most common use cases for dynamic tasks: processing files in Amazon S3. In this scenario, you'll use an ELT framework to extract data from files in Amazon S3, load the data into Snowflake, and transform the data using Snowflake's built-in compute. It's assumed that the files will be dropped daily, but it's unknown how many will arrive each day. You'll leverage dynamic task mapping to create a unique task for each file at runtime. This gives you the benefit of atomicity, better observability, and easier recovery from failures.

All code used in this example is located in the dynamic-task-mapping-tutorial repository.

The Graph View for the DAG looks similar to this image:

When dynamically mapping tasks, make note of the format needed for the parameter you are mapping. In the previous example, you wrote your own Python function to get the Amazon S3 keys because the S3toSnowflakeOperator requires each s3_key parameter to be in a list format, and the s3_hook.list_keys function returns a single list with all keys. By writing your own simple function, you can turn the hook results into a list of lists that can be used by the downstream operator.