Using the Astro CLI to push your Astro project, including your DAG code, to a Deployment is the foundation for managing changes on Astro. Astro supports two types of deployment options:

To run astro deploy --dags, you must first enable the DAG-only deploys feature for each Deployment.

Follow the steps in this document to manually push your Astro project to a Deployment. For production environments, Astronomer recommends automating all code deploys with CI/CD. See CI/CD.

To exclude specific files during a code deploy, see Ignore files with .airflowignore.

If you're using Astro Runtime 6.0.5 or later on a Mac computer with an M1 chip, you must install Astro CLI 1.4.0 or later or your deploys will fail. See Install the CLI.

Run the following command to authenticate to Astro:

After running this command, you are prompted to open your web browser and log in to the Cloud UI. Once you complete this login, you are automatically authenticated to the CLI.

If you have Deployment API key credentials set as OS-level environment variables on your local machine, you can deploy directly to Astro without needing to manually authenticate. This setup is required for automating code deploys with CI/CD.

Step 2: Push your Astro project to an Astro Deployment​

To deploy your Astro project, run:

This command returns a list of Deployments available in your Workspace and prompts you to pick one.

After you select a Deployment, the CLI parses your DAGs to ensure that they don't contain basic syntax and import errors. This test is equivalent to the one that runs during astro dev parse in a local Airflow environment. If any of your DAGs fail this parse, the deploy to Astro also fails.

If your code passes the parse, the Astro CLI builds all files in your Astro project directory into a new Docker image and then pushes the image to your Deployment on Astro. If the DAG-only deploy feature is enabled for your Deployment, the /dags directory is excluded from this Docker image and pushed separately. To force a deploy even if your project has DAG errors, you can run astro deploy --force.

To validate your code before deploying it to Astro, you can run astro deploy --pytest. Adding the --pytest flag makes the CLI run all tests in your project's tests directory using pytest. If any of these tests fail, your code deploy also fails. This can help you prevent your team from deploying DAGs to Astro that contain errors.

After the deploy completes, Docker image information for your Deployment is available in the Image tag field in the footer of the Airflow UI. Depending on how your organization deploys to Astro, the Image tag field displays a unique identifier generated by a Continuous Integration (CI) tool or a timestamp generated by the Astro CLI on astro deploy. The Image tag field in the Airflow UI footer identifies the Docker image running on the webserver of your Deployment. This information can help you determine if your deploy was successful, but it does not identify the Docker image running on your scheduler, triggerer, or workers. To confirm a code push with complete certainty, contact Astronomer support.

Improved visibility into the health of your Deployment and the status of deploys is coming soon. If you're interested in early access to this feature, contact your Astronomer representative.

What happens during a code deploy​

When you deploy code to Astro, your Astro project is built into a Docker image. This includes system-level dependencies, Python-level dependencies, and your Dockerfile. It does not include any of the metadata associated with your local Airflow environment, including task history and Airflow connections or variables that were set locally. This Docker image is then pushed to all containers running Apache Airflow on Astro. If the DAG-only deploy feature is enabled for your Deployment, the /dags directory is excluded from this Docker image and is pushed separately. 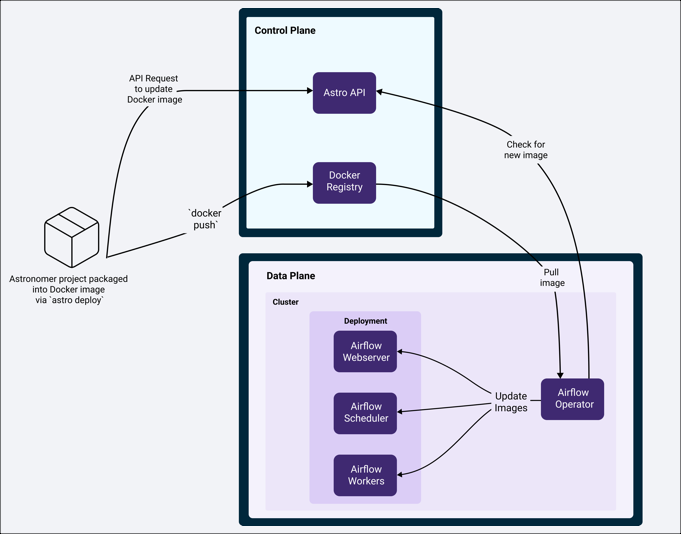 With the exception of the Airflow webserver and some Celery workers, Kubernetes gracefully terminates all containers during this process. This forces them to restart and begin running your latest code.

If you deploy code to a Deployment that is running a previous version of your code, then the following happens:

Astronomer sets a grace period of 24 hours for all workers to allow running tasks to continue executing. This grace period is not configurable. If a task does not complete within 24 hours, its worker will be terminated. Airflow will mark the task as a zombie and it will retry according to the task's retry policy. This is to ensure that our team can reliably upgrade and maintain Astro as a service.

If you want to force long-running tasks to terminate sooner than 24 hours, specify an execution_timeout in your DAG's task definition.

This feature in Public Preview.

To push only DAGs to Astro for a faster development experience, you must enable the feature for each Deployment. You only need to enable the feature once. When it is enabled, you must still run astro deploy when you make a change to any file in your Astro project that is not in the dags directory.

Enabling DAG-only deploys on Astro has a few benefits:

Enable DAG-only deploys on a Deployment​

Before you complete this setup, ensure that you have access to the Deployment's Astro project and can trigger deploys from your current computer.

Triggering a DAG-only deploy pushes DAGs to Astro and mounts them to the workers and schedulers in your Deployment. DAG-only deploys do not disrupt running tasks and do not cause any components to restart when you push code. If you deploy changes to a DAG that is currently running, active task runs finish executing according to the code from before you triggered a deploy. New task runs are scheduled using the code from your latest deploy.

Run the following command to deploy only your dags directory to a Deployment:

Disable DAG-only deploys on a Deployment​

If you have Workspace Admin permissions you can turn off DAG-only deploys for a Deployment at any time if your organization doesn't benefit from faster deploys or prefers a deployment method that is exclusively based on building and deploying your Astro project as a Docker image. When you turn off DAG-only deploys, the way Airflow and Astro read your DAGs changes, and all existing DAGs are removed from your Deployments and they might not appear in the Airflow UI.

By default, running astro deploy with the Astro CLI builds your Astro project into a Docker image and deploys it to Astro. In some cases, you might want to skip the build step and deploy a prebuilt Docker image instead.

Deploying a prebuilt Docker image allows you to:

To deploy your Astro project as a prebuilt Docker image:

For more information about this command, see the CLI command reference.

If you build an AMD64-based image and run astro deploy from an Apple M1 computer, you might see a warning in your terminal. You can ignore the warning.